Itachi was a prodigy child that was known to be very powerful already. Itachi was so talented that he joined the ANBU at only 11 (age requirement of 13), a special ops force that executes mission ordered by the hokage. Those missions require the ability to kill in cold blood, without breaking a sweat and Itachi was particulary talented for this kind of job. Making his family proud, Itachi was encouraged to attain higher grades in the ANBU forces but only to achieve Uchiha’s Clan goal of coup d’état against Konoha. While he didn’t agree with Uchiha Clan’s ideal, Itachi was an ANBU captain (promoted at 12) that acted as a double agent, reporting every informations he heard about the Uchiha to the Konoha’s leader. Resulting in him, killing his own clan to stop them from overthrowing and destroying the peace in the village. This Itachi ANBU Figure pictures him with his sword, standing on a tree and ready to kill the enemy with his sharingan. Get your Itachi ANBU Figure now if you love Itachi’s story. 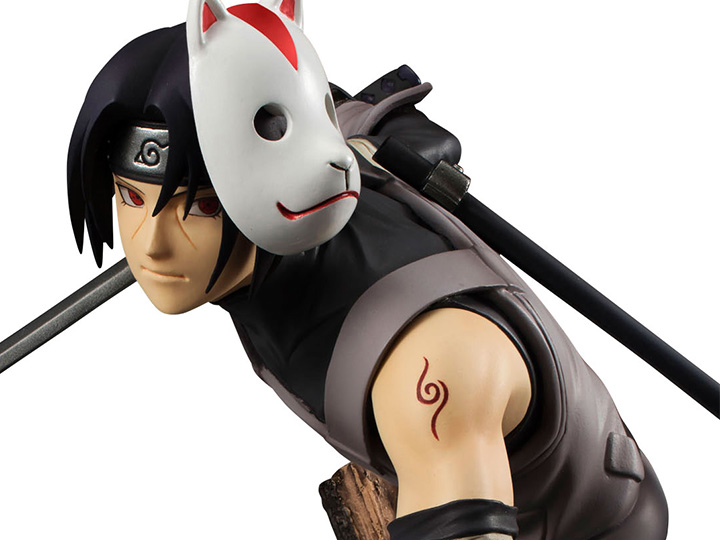 Itachi Uchiha was a shinobi of Konohagakure’s Uchiha clan. He became an international criminal after murdering his entire clan in one night, sparing only his younger brother, Sasuke. He afterwards joined the international criminal organisation known as Akatsuki, whose activity brought him into frequent conflict with Konoha and its allies. Itachi was also a very skilled and powerful ninja, acknowledged as one of the strongest of his time. Despite his actions, he was not truly evil; rather, he believed that it was necessary to further the goals of Akatsuki. However, Naruto Uzumaki eventually saw through Itachi’s malice and convinced him to protect Sasuke instead. When it became clear that Akatsuki would not stop until it had obtained all nine of the tailed beasts, Itachi sacrificed his life to protect Konoha by allowing Sasuke to kill him. His efforts allowed many years of peace to follow, which ended when Akatsuki finally succeeded in their objective. In the anime series Naruto Shippuden it is revealed that prior to joining Akatsuki Itachi was actually a member of an elite group within Konoha’s military known as the ANBU Black Ops. As an ANBU operative he was given special missions by the village